Questions That Just Won't Flush Away...

Why is the Body Part that I'm most proud of also the least reliable one?
Soalan Bonus:
Why is this Body Part designed in such a way that makes it so vulnerable to attack from the Corners of Desks, Flying Hockey Balls, etc?

Am I really as funny as I think I am after 15 beers?


Why do women do everything in their power to destroy the careers of other women, and then blame The Glass Ceiling on men?


Why are there five wh- questions and then there's How? Wouldn't it have been simpler to just name it Whow?


Do they teach Science in English now because scientific terms in Malay sound like dirty words (pipet, buret, penunu) ?


You know those tabungs they have in McDonald's?
Why do they make the slots so small?
When they give me my change, should I spend the next few minutes putting coins in one by one, thereby annoying the hell out of the people behind me?
If I don't, will I be able to live with the shame of allowing a crippled orphan to starve just because a few people behind me were too impatient wait for their Quarter Pounders?
Who needs this kind of pressure, dammit?
Soalan Bonus:
What the fuck is the difference between a Quarter Pounder with Cheese and a Double Cheeseburger?


How come no one will publish my book? Is it really that bad? Will it help if I put the word Dalil in the title?


Why is Oprah a role model for women? You don't see men running around wanting to be Dr Phil...
Soalan Bonus:
If Oprah is so smart, how come her studio audience looks suspiciously like the audience in the Home Shopping Network, as the following example undeniably demonstrates:

HOME SHOPPING NETWORK GUY:...as you can see, the Ginsu knife can cut through your car door...
STUDIO AUDIENCE: WooooooYaaayyyyyyaieeeeeeeeeee!!!!!!!


Where is Arsenal's Next Dennis Bergkamp?


Where is Arsenal's Next Patrick Vieira?


Now Everyone Can Fly? Why? Shouldn't some people just take the bus? Or better yet, stay the fuck at home?


When bad people die, do they go to Puduraya?


Who came up with the word Konek? What self-respecting man, no matter how small his weiner is, would look down and say "Akan ku namakan benda ni Konek?"
Soalan Bonus:
Was it, in fact, a woman who named it? Was it...Oprah Winfrey?????


What nonsense did I learn in school?
Soalan Bonus:
Why couldn't Pythagoras keep his fucking Teorem to himself?
Soalan Bonus 2:
Since leaving school, has anybody ever written a letter containing the phrase "semoga Saudara berada dalam keadaan sihat walafiat"?


Does Panadol Actifast really work faster? If so, why do they still sell Panadol? Does anyboy ever say "I have a headache, but I want it to last a bit longer than it has to."?


How come every single driver complains about 'driving in fucking KL', yet they think it's strange that I don't drive?


Don't the blind accordion players on the kaki lima get sick of playing Lambada over and over again? Do they know how bad they sound? Are they deaf as well?
Soalan Bonus:
In the Paralympic Games, are the referees really blind?
Soalan Bonus 2:
Why are there so many blind people asking for money in Bangsar? Is it because they can't see that the other blind people are there as well?
Soalan Bonus 3:
If I give money to retards, is it still a sin to make fun of them?

Is it disturbing that I thought Daphne in Scooby Doo was hot, considering she was, in fact, a cartoon?
Soalan Bonus:
Wouldn't it be funny if, at the end of Scooby Doo, when they unmask the villain, it turns out to be.....Oprah Winfrey!!!!

This post is inspired by (but nowhere near as funny as) the writing of my candidate for Sasterawan Negara, Lily Liverbird. She's been bugging me to start a blog for the longest time, and I've been bugging her to write a book.
I've started a blog, Lily.
Now write a book, you bloody Penunu! 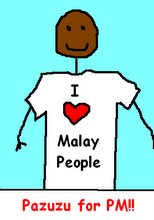 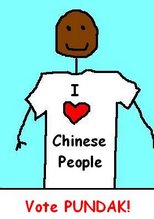